Yoga is a spiritual practice that is based on an exceedingly delicate science that focuses on bringing mind and body into balance. It is both a science and art of living a healthy and balanced life. The name ‘Yoga’ comes from the Sanskrit word ‘Yuj,’ which means ‘to join, merge, or unify.’ According to Yogic sacred writings, the act of Yoga produces the unification of human awareness with that of the Universal Consciousness, exhibiting perfect harmony between mind and body, Man and Nature. Yoga is supposed to assist in the balancing of the three doshas (Vata, Pitta, and Kapha). According to current physicists, everything in the universe is just an appearance of a corresponding quantum environment. A yogi is someone who has obtained Mukti, Nirvana, or Moksha, a state of freedom alluded to as Mukti, Nirvana, or Moksha, a state of liberation alluded to as Mukti, Nirvana, or Moksha.

As a result, the primary goal of Yoga is Self-realization, which leads to the attainment of ‘the state of salvation (Moksha) or ‘liberation’ (Kaivalya). Yoga practice focuses on living with freedom in all parts of life, as well as health and harmony.

Yoga is a science that extends back thousands of years, long before any religion or belief system existed, and it is thought that the practice of Yoga began with the arrival of civilization. In yogic legend, Shiva is the major yogi (Adiyogi) and the primary Guru (Adi Guru).

The date of June 21 was chosen as it is the Summer Solstice, the day where there is the most sun out of every other day of the year. Overall, it received support from 177 nations, the highest number of co-sponsors for any UN resolution, proclaiming June 21 as International Yoga Day.

The Union Ministry of AYUSH has chosen “Yoga for Humanity” as the subject for the International Day of Yoga in2022, Prime Minister Narendra Modi stated in his monthly “Mann Ki Baat” address. International Yoga 2022 (IYD2022) will be held for the eighth time on June 21, with the main event taking place in Mysore, Karnataka. India’s Prime Minister, Narendra Modi, has also urged Indians to participate enthusiastically in the festivities.

PM Narendra Modi stated that the theme for this year’s event was chosen after considerable deliberation and discussion and that it appropriately portrays how Yoga has benefited humanity in alleviating suffering during the COVID-19 Pandemic. He believes that throughout the post-Covid geopolitical crisis, Yoga would bring people together through love and compassion, establishing a sense of global unity.

Whether you desire a more physically demanding session or a gentle, peaceful, meditative class, there are many different forms of yoga to choose from. Although scientific study into yoga’s advantages is still in its early stages, much of what has been discovered thus far validates what many practitioners have believed for millennia: yoga is extremely good for our overall well-being.

According to a 2016 survey, the majority of people chose yoga to increase their flexibility. Physical well-being needs a great deal of adaptability. Yoga is available in a variety of styles, with varying degrees of difficulty ranging from intense to moderate to gentle. Flexibility has been demonstrated to improve even with low-intensity exercises.

Yoga appears to be especially beneficial for persons 65 and older who want to improve their flexibility. Reduced flexibility is a natural aspect of aging, but a 2019 study revealed that yoga both reduced the loss of flexibility and enhanced it in older persons.

According to the American Psychological Association, 84 percent of American people are affected by long-term stress. As a result, it’s not surprising that the second most popular reason for doing yoga is to relieve tension. Thankfully, research shows that yoga, particularly asana, is effective at reducing stress.

But keep in mind that yoga is much more than just a physical practice. Meditation, breathing exercises, and auditory rituals like chanting and sound baths have all been demonstrated to reduce stress and tension.

One of the most frequent mental health problems in the world is major depressive disorder (MDD). Yoga can now be regarded as an effective alternative treatment for MDD, according to a 2017 meta-analysis of 23 interventions that looked at the impact of yoga-based treatments on depressive symptoms. Depressive symptoms have been demonstrated to be greatly improved by both movement-based yoga therapy and breathing-based techniques.

Every person’s existence requires a sense of balance. Yoga has been proved to help athletes enhance their balance and overall performance. According to a review of research conducted on healthy populations, most people’s balance may improve after practicing yoga on a regular basis. Yoga has also been shown to improve balance in older people, according to new research. Adaptive yoga, also known as chair yoga, is especially beneficial for older persons and people with injuries who are less mobile or have trouble maintaining their balance.

As a technologically dependent society, we appear to be spending an increasing amount of time sitting or bent over devices. However, a recent assessment of 34 research studies discovered a developing pattern: yoga enhanced brain functioning in the areas involved in interception (the ability to recognize sensations in your body) and posture.

Yoga’s focus on mobility and flexibility can aid alignment by releasing commonly tense muscles, such as the hamstrings, and improving spine mobility.

The importance of yoga in chakra balancing:

Because it aligns with the physical body, yoga is one of the most basic techniques to balance each chakra. Your subtle body is also rebalanced by balancing and stabilizing your physical body through asana (yoga posture) practice. This realigns the chakras, which are responsible for certain behaviors, making it easier to break old patterns, beliefs, and habits. 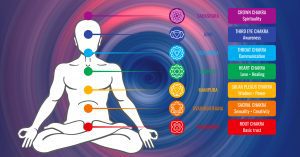 The root chakra is positioned at the base of your spine and assists you in ensuring that you have everything you require to live. It gives you a sense of security and boosts your physical vitality.

The root chakra’s stones are typically red, brown, or black in color. They work to keep you safe, stable, and secure. Black Tourmaline, Blood Stone, and Garnet are the root crystal chakras that help you stay grounded.

The sacral chakra is our center of pleasure and play, and it is the second chakra. This is where a significant portion of our sexual energy is stored. The sacral chakra is located in the center of the belly, right below the navel. It has a warm, nurturing energy and is related to the hues yellow and orange.

The Sacral Chakra stones are mainly coral, orange calcite, and carnelian. The sacral chakra’s energy empowers us to manifest our desires, develop empathy for others, and be passionate about what offers us joy and inspiration.

Our warrior spirit resides in our solar plexus chakra. The third chakra is located in the center of the body, in the upper belly, and directly below the breastbone. It is related to the hues of gold and yellow.

The heart chakra, located in the center of your chest, helps you sense the warmth and connectivity of universal, unconditional love. It can help you change negative emotions like rage into compassion and love.

Green stones are frequently used to heal the heart chakra; however, some pink stones can also be helpful. Amazonite, Aquamarine, and Emerald are the heart Chakra Crystals. Place one of these crystals over your heart chakra to help you find emotional balance and deepen your ties with the people who matter the most to you.

The throat chakra is located at the base of your neck. Its blue light energizes your aura and physical body, allowing it to support you in expressing your truth and releasing trauma.

The third eye chakra, or sixth chakra, is the entrance to all of our inner knowledge and the reservoir of our intuition. Here, we connect with our most inner selves and activate our psychic abilities and spiritual awareness. Just above the eyebrows, in the middle of the forehead, is where the third eye chakra is located. It is related to the purplish-blue or indigo color.

The crown chakra, the highest of the seven, represents our ideal state of perfection. Our spiritual awakening and our connection to the cosmos and all of its cosmic glory occur here. It is the wellspring of our purest embodied energy, highest vibrations, and most sublime state. The golden-white and violet colors are related to the crown chakra, which is situated at the top of the head.

Amethyst, labradorite, and clear quartz are the crystal stones connected to the crown chakra.

How to Use Crystals to Balance Your Chakra:

All that is required for chakra healing with crystals is to place each crystal on or around each chakra. When chakra stones are placed in the chakra’s area, the chakra’s vibration will match the crystal’s vibration.

While placing each gemstone on your energy center, you can meditate or simply relax. While enhancing your awareness of your own body, meditation allows you to send healing energy directly to your chakra.

Practicing yoga on a regular basis is a simple and enjoyable way to align your chakras. Yoga and meditation can help you find balance in your body, mind, and soul. Purifying your energy centers is beneficial to your overall health and happiness.

Yoga is a broad term that refers to a variety of disciplines, the bulk of which emphasize meditation practices rather than physical activity. Yoga can also involve karmic or humanitarian actions. Because yoga is not limited to physical activity, it is a practice that may be done on a regular basis.

Choose the method that works best for you, and keep in mind that committing to a yoga practice is an investment in yourself!